The hotel has a long history, having been used by travellers for 200 year or more. Most of the early passers by would be farmers, miners, merchants, smugglers and others travelling over Black Sail, Sty Head and Burnmoor passes to ply their trade in adjacent valleys.

Will Ritson (b 1808) - huntsman, wrestler, farmer, fellsman, guide, raconteur, was the first and is still the most famous landlord of the hotel, renowned as "The World's Biggest Liar". Ritson retired in 1879 to be succeeded by Dan Tyson. More recently Edwin and Carolyn Hammond acquired the hotel in the 1970s and transformed it from near dereliction into a hotel with more modern facilities whilst preserving the essential character and ethos of the home of British climbing. Since 2000 the hotel has been owned by Nigel and Lesley Burton ( owners@wasdale.org ) who are committed to maintaining the Wasdale spirit for future generations.

Samuel Taylor Coleridge is reputed to have scrambled up Scafell Pike in 1802, some 80 years before the Golden Age of early British climbing (1882-1903). Climbers then were, for the most part, middle and upper-middle class professionals. They relished their annual Easter and Christmas vacations and summer holidays at Wasdale Head, the centre of Lakeland climbing. These men - for brief periods - left their jobs, their families, and their cares behind, to journey to the Wastwater Hotel, where, full of a fresh and invigorating sense of adventure and exploration, they proceeded to define a wonderful new sport.

The Abraham Brothers (George and Ashley) were not only great climbers but avid photographers who captured the spirit of the age. Famous climbers such as Walter Parry Haskett Smith, the first to ascend Napes Needle in 1886, and Owen Glynne Jones epitomised the era. http://www128.pair.com/r3d4k7/HistoricalClimbingImages6.html

Over the years Wasdale has also played host to many great men of literature including Wordsworth, Coleridge and Dickens. In his autobiography Nicholas Monserrat tells of buying his first ever glass of beer here at the Wasdale Head Inn.

The advert below is from 1926 - spot the differences! 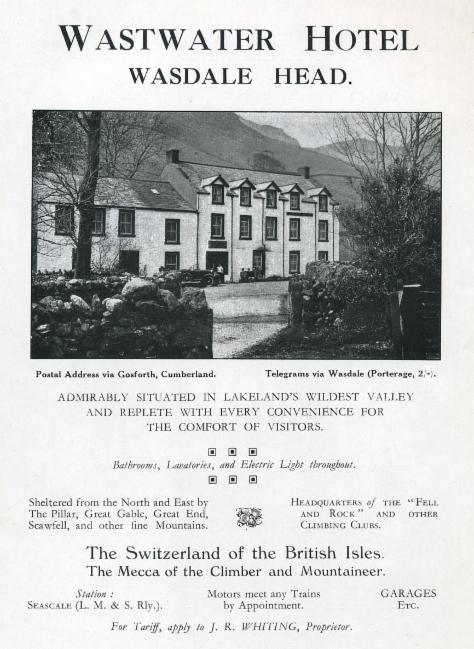